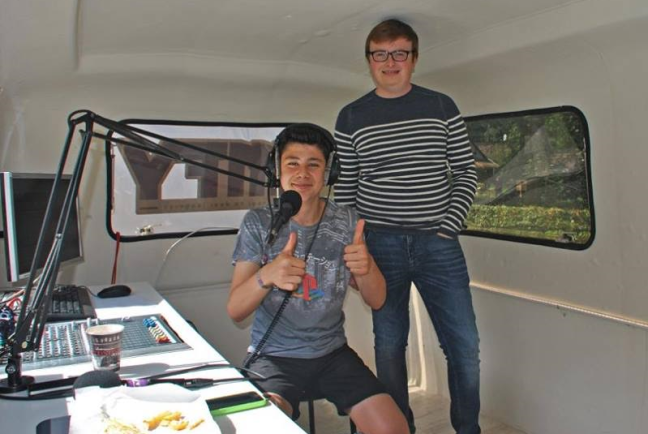 Long time Power Studio user, Lokale Radio MFY have been broadcasting over the internet for 6 years. In this year's round of issuing terrestrial broadcast permits, they are batteling to get their own place on the dial!

The Lokale Radio in Vlaanderen-blog did an interview with Lenn Melotte the station's founder and director:

"I've started MFY, Houthalen-Helchteren's local radio station in 2011", says Lenn Melotte. "The studios and offices are located in Helchteren's former city-hall. Multiple times per month we do live remote broadcasts with our radio-caravan. When we started, we mostly targeted young people but nowadays we target a broader audience."

MFY (Music For You)'s music-format is along the lines of MNM's, but regionally targeted and suplemented by music from the 2000's and local Limburg's talents. Lenn, who recently did an internship at VRT Radio 2 Limburg, can depend on a loyal group of a dozen volenteers to keep the station running.

Internet experience as a strong asset

MFY made the decision to apply for an FM license after carfull deliberation, and they are far from being in over their heads. The lessons learned from broadcasting over the internet are a strong asset! "In 2011 we were just 16 years old, which is very young. We're older now and have gained a lot of experience and knowledge in the field of radio, especially community radio. Our goal is to innovate and make the radio come alive. Quality is the most important thing for us. We're nothing like the old-fashioned low-power stations.", Lenn explains.

At the same time as applying for a FM frequency, MFY is building an online platform which enables it's young listeners to re-listen out content, which is what that audience wants. "We mostly want to bring stuf that the national stations consider too small, but we consider interesting.", according the young broadcaster.

Lenn is very optimistic about the programming MFY is going to bring when they acquire a place on the dial on January 1st, 2018": "When we obtain a license, we are going to be a modern station that puts the community first. With our mobile caravan-studio we will be close to the people and give them a platform to be heard. We will attract a growing audience of listeners by being a part of all major events in our region. Out motivated and knowledgeable staff generates high quality content, which makes the station stand out!"